The city of Belgrade Serbia has been conquered 100 times since its founding in 100 BC, our guide tells us, then 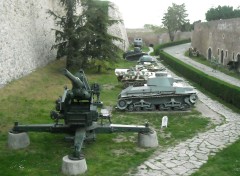 laughs as he offers to give us a sixty second history lesson. He begins reciting. “Romans, Byzantines…….. Turks, Hungarians, Turks, Austrians, Turks, Germans, Russians …”  Turks are clearly a big part of this recitation. As he sing-songs his way through 100 invasions we are driving by the bombed out buildings still standing from the United States intervention in 1999. Clearly most of us on the bus have never seen a bombed building before, but a sense of respect prevents us from pulling out cameras.

Our tour guide is a nice man, but he is still angry about so many things from the past and his anger creeps into the words he chooses.  His perspective is at least ninety degrees away from the historian who gave us a lecture earlier today and who was less angry but not without his own bitterness as he tied WWI into WWII into the problems in the Balkans today.

As the guide walks us by the tanks preserved from both world wars, I remember Lola in my novel z2 quoting Faulkner’s famous line “The past is never dead. It’s not even past.” 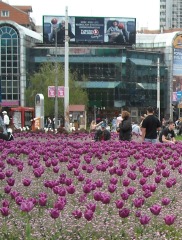 Dinner tonight is in Belgrade’s Bohemian district. We drive through a modern downtown, past the blooming spring flowers.  Once there we are surrounded by live music. Liquor flows freely and food is ample and all of it has touches of Turkey, Austria, Russia, Hungary, and yes more Turkish influences. There is something for dessert called walnut pie that would make an average baklava weep with envy. So yes, there is joy to be shared here as well in this city of 100 conquests.

I think of home and am glad that my fellow Texans don’t harbor the kinds of deep animosity that I’ve glimpsed here. Oh wait. There are a lot of pissed-off people in Texas too. They don’t like this thing that’s happened, and they don’t like the way that went. The difference? They don’t have nearly as many good reasons for their anger.  In fact, compared to the Serbians, many of them have no good reasons at all.

5 thoughts on “A Lot of Pissed-off People ………. (thoughts from Belgrade)”