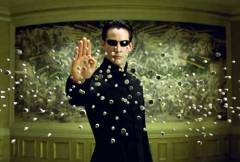 If you type “slowing down” into Google, one of the first alternatives it will offer you is a search of “slowing down time”. It is obviously a popular topic, and I knew when I created my hero Alex that his ability was hardly unique. Normal humans often report time moving slower during an emergency, although Jeff Wise has a wonderful blog post explaining how researchers have shown this is just an illusion. Fictitious super humans frequently slow down time to stop crime or protect themselves, none better photographed than Neo in the original Matrix movie.

But Alex is just a normal guy, in what I want my readers to believe is the real world. What’s more, time doesn’t merely slow down for him in an emergency, it eventually moves differently for him when he wills it to do so. During much of z2, Alex learns to recognize and to finally use this gift. Along the way, he gives the very nature of time, and the possibility of time travel, some serious consideration.

As I created Alex, I wanted him to discover another who shared a variation of his talent so that at the very end of the book they could work together. Xuha, a short-in-stature student of Maya descent, surprises Alex with his fighting abilities and confides his own time manipulation talents. The two of them consider whether great fighters, athletes, and musicians might not all have a touch of these same abilities.

Here is an excerpt from z2, telling of the first time that Alex uses his ability off of a basketball court.

And then there she was. Alert, wide brown eyes and dark reddish-brown hair almost the color of the logs popped up about eighty yards away, just downstream of the logjam that Ken had called a “strainer.” All three of them shouted to her before the current sucked her back under. Alex felt his own breathing return, just knowing that she was alive. Seconds later she popped up again, downstream of a second clump of branches, but this time she was coughing out water hard. Alex looked closer. Good Lord. She didn’t have her life jacket on.

Ken seemed not to have noticed that fact, as he started moving, relieved, along the shore hoping to intercept Lola somewhere downstream. She was in the middle of the river now, moving fast, and she appeared to be coughing too hard to even try to make her way to shore. Oh hell, Alex thought, I know that she can barely swim. He looked around for anything he could grab quickly.

“Alex, get back here!” Sara yelled it as she saw Alex start to wade out into the fast cold water, a canoe paddle in his hand.

“Alex, no!” Ken joined in as well from his position downstream.

But all Alex could think of was that is he was going to have to pay for his decisions, he was damn well going to make sure that he did everything he could to make this come out right.

Then he noticed how wide the river really was. How far to the center Lola was and how fast she was moving. How slow his own progress in the deep cold water was going to be. And he realized that he’d never make it to her in time. She’d flail on past, still dozens of feet away from him, and none of them would have any way of reaching her before cold and fatigue completely overtook her.

And then it happened. The roar of the water and the sound of Ken and Sara’s shouts faded into a muffled background, and all Alex heard was the sound of his own heart pounding. The beat of it remained steady and firm as the water began to move more slowly. As did Lola. Alex had the odd sensation of walking out onto a basketball court, willing his body to move to the rhythm of the game, of this game. His feet felt light but firm as they moved with power along the rocky riverbed. His hands were strong and capable as they lifted the paddle out towards Lola. He was moving at a normal pace to him, but he was already in chest-deep, and only feet from her now. She looked puzzled but grateful, and Alex heard his own voice boom slowly “Lola! Grab the paddle!”

He thrust it into her hands, and as the current slowly twisted her body downstream, her fingers just barely curled around the white blade. Alex pushed the paddle more firmly into her hands. Her grip tightened as she realized that this ordeal could actually be over. Then Alex used the paddle to pull her in closer, finally reaching out to grab her shirt and drag her in towards shore. She collapsed at the waters edge, still coughing hard and shivering uncontrollably.

Sara rushed to her, and Ken hurried back to them, as Alex himself sunk down into the pebbled sand, now shaking with cold. Slowly, Lola’s coughing picked up speed, as did Ken and Sara’s movements and speech, and then everything moved with his heartbeat again, happening at the pace it should.

“I had no idea you could move that fast,” Ken chided Alex with a relieved grin as he joined the group.

“We yelled at him not to go out into that water,” Sara was shaking her head to Lola. “But thank heavens he did, huh?”

Lola was smiling. She pulled herself upright and stumbled towards Alex to give him a long hug. “How did you ever make it out there to me?” she asked.

“I wasn’t willing to accept any other alternative,” he said simply.

As the rest of the day centered on getting off of the river and getting the Zeitmans dry and warm, and all of them back on the road headed home towards Texas, Alex kept having one thought.

I had no idea. I don’t know why it never occurred to me. But it didn’t. I had absolutely no idea that time would slow down like that for me anywhere but on a basketball court.

For two of my favorite sources of information on time dilation, see
It’s About Time: Understanding Einstein’s Relativity, N. David Mermin, ISBN 978-0-691-12201-4
Physics of the Impossible: A Scientific Exploration into the World of Phasers, Force Fields, Teleportation, and Time Travel, Michio Kaku, ISBN 978-0-385-52069-0

One thought on “Slowing Down Time”