I used to teach a class in ethics as part of a training program for my company. My co-instructor liked to start off with this question. Have you ever broken the law? Most people would shake their heads.

Didn’t borrow any of the down payment for your first house from you parents? Never tried recreational drugs? Underage drinking? Never saw any of it occur and failed to report it?

By this point much of the class was shrugging or looking sheepish.

Never ran a stop sign? Crossed the street on a red light? Exaggerated the value of your clothing donations on your income return?  Never double parked or jaywalked or even drove a single mile over the speed limit? Ever?

She had their attention then, and we generally went on to have a pretty lively discussion about what it means to be a law-abiding citizen. I liked to talk about Jack Sparrow’s famous quote that his pirate code was really more of a “guideline.” The fact is, we all consider some laws to be guidelines, particularly when we believe that consequences of our breaking them will not hurt anyone. The perception of which laws this applies to changes over time

In this class we talked about bank robbery versus littering. When I was young my parents would never have considered robbing a bank, although they did habitually take towels from hotels, assuring me that it was included in the price of a room. I later learned otherwise. My parents certainly considered laws against throwing trash out of the car to be a suggestion, along with any requirement to wear a seat belt. Like I said, times change.

Laws change, too, as do penalties and enforcement. When society begins to deem that “this law is serious” the hope is that the increased scrutiny and greater fines are made public first, not used as gotcha fundraising, and that the changes are uniformly enforced among all income levels and ethnic groups. (I know. That’s the hope.)

Much of the purpose of our particular class was to end up in a discussion about business ethics. My company worked with many different countries, all of which had laws against bribery, but many of which had cultures that considered those laws as guidelines. We also talked about insider trading, and how its acceptability has changed over time. I like the example from the 1980’s movie The Big Chill, when Kevin Kline tries to help his close friend William Hurt by tipping him off that a company is about to be acquired and its stock will shoot up. A friendly gesture? Or ten years in jail? You be the judge. 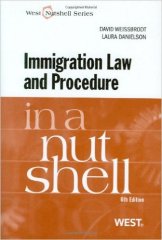 I’m remembering those lively discussions and wondering how my former co-workers back in the Houston area are feeling about illegal immigrants. It’s an emotional topic, today more than ever. Because z2 is partly about immigration, I did a fair amount of research on the subject as I wrote. My main source was a wonderful book called “Immigration Law and Procedure in a Nutshell” by David Weissbrodt and Laura Danielson, which used humor and antidotes to help illustrate the changes in both law and perception over the decades.

My one grandfather was brought here at two years old and never knew the country of his birth. I’m pretty sure that all eight great-grandparents of mine arrived from Russia with no paperwork; some of them didn’t even know what country they were going to. Half of one family ended up here, half in Argentina. Oh well, at least they weren’t in Russia, where authorities were cracking down on them for having immigrated from Germany a century earlier.

You see, at one time the world was a place where people fled danger, hoping and expecting that those elsewhere would allow them to start a new life if they just worked hard and didn’t make trouble. Paperwork was a guideline. As long as they didn’t hurt anyone, it was really okay.

We live in a different sort of world now, but not everybody has caught up. We have people who were brought here as children by well meaning parents who didn’t think they were doing something that awful. We have those who came here even recently believing that the worst a generous and kind country like ours would do to them would still be far better than what they were facing from tyrants where they were.

We have every right to make our borders completely non-porous today if we so choose. Cost versus benefit, compassion versus safety; these are debates worth having. But when it comes to how we treat those already here, it would serve us well to remember.

The text we used for our ethics class was a wonderful  book called How Good People Make Tough Choices by Rushworth Kidder. It talked about the main ethical dilemmas facing moral people. Loyalty versus truth. Short term thinking versus long term thinking. Individual rights versus social responsibility. And my personal favorite, mercy versus justice. Our most passionate discussions were about this last one, as we tried to get our participants to understand how often we as humans want mercy for ourselves, our loved ones, and those like us, and how stridently we demand justice for everyone else.

I’ve been thinking about that class a lot these past three weeks, and wondering if I could try just teaching it to passing strangers on street corners. Would anyone stop to listen?

2 thoughts on “Have you ever broken a law?”