I violate one of the basic rules of storytelling. I do it often, I do it on purpose, and I like doing it. 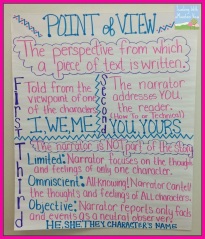 The rule is to pick a point of view and stick to it, at least for a full chapter. But because the stories I tell myself are never told from a single point of view for very long, how could the stories I tell others ever be? One of my greatest fascinations with a tale is how differently the events appear to various characters. So if you read something I write, be prepared to hear the plot unfold through several sets of eyes.

My latest book is providing me with new challenges in this regard. As the sixth and last book in my 46. Ascending collection, it features a dozen characters with five unusual powers as they learn to work together. I’m having fun changing the point of view, but am also striving to find new ways to do it so that it doesn’t leave my readers’ heads spinning.

My character Alex, who can slow down or speed up time, reacts to save his wife Lola while they are aboard a cruise ship in a storm at sea. I tried this technique for showing how they both experience what happens.

About twelve minutes later, or so it seemed to her, a series of sharp knocks on the cabin door woke all three of them. A pleasant young man brought in a tray of dry snacks, cartons of water, more motion sickness treatments, and extra pillows, cushions and even bungee cords for securing people and things.

“We are in a bit of a lull now,” he cheerfully informed them “and the rain has stopped. The captain says that if you want a spot of air on deck at all today, now would be the time to take it.”

“I’ll pass,” Maurice muttered without moving. “But I will take a look at your pill selection.”

“I could really use the fresh air,” Lola said. She looked at Alex hopefully. He knew how hard it was for her to stay in the enclosed cabin.

After that, their recollections would always be different.

She would remembered wanting to leave the cabin quickly before he changed his mind.

He would remembered wondering why she didn’t stop to put on something besides those stupid cheap slippers she’d bought in Ushuaia.

She would remember hurrying down the hall because she wanted to catch the heavy metal door before it latched completely behind a couple coming back inside.

He would remember being annoyed because he had to speed up to join her as he felt a large gust of wind blow through the open door.

She would remember bounding outside, then looking up and being overwhelmed at the sight of the unusually large wave on the other ship of the ship. She would recall the roar of it, the froth of it, the fear of it as she started to slide backwards with the tilt of the deck.

He would never even see the wave. As he reached the door, he would be looking down, watching her momentum carry her into a slide as she slipped along an improbably tilted deck towards a rail that was clearly inadequate, coming only as high as her thighs for christsakes but sticking out way over the ocean, and what the hell kind of guard rail was that?

She wouldn’t even remember a guard rail, just a second of terror, a realization that she was going over board.

He would see her slow down, way down, almost stopping as she hung there.

She would remember Alex grabbing her arm so fast she thought he’d dislocated her shoulder, then both of them slamming onto the deck and sliding backwards towards the door, with Alex grabbing on to something as the boat made a high-angle lurch the other way and then a few more frightening tilts back and forth.

He would remember time speeding back up as she cried and shivered with the cold and the shock, and thinking that he had almost lost her again.

She would only remember thanking him and telling him that she loved him.

He would remember silently holding her to warm her, and hoping she understood how much he loved her too.

5 thoughts on “Point of View”