Today it is my pleasure to welcome author Richard Hacker and his fantasy thriller Vengeance of Grimbald.

Addison and Jules, members of the League, a secret alchemist society of Inkers who protect the time continuum, believe they defeated their enemy, Cuthbert Grimwald, known to them as Kairos. When he resurfaces filled with vengeance, intent on destroying the League, and acquiring the Alchimeia, a book of such power the League has hidden it for millennia, Grimwald leaves a path of destruction across centuries. As he quests for absolute control of reality, Addison and Jules pursue him through time and death in a desperate struggle to save the world from his vengeance.

I asked Richard Hacker to share his thoughts about the difficulties of writing about time travel.  Here is his fascinating response: 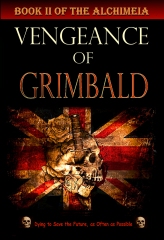 VENGEANCE OF GRIMBALD, the second book in the Alchimeia series is a fantasy sci-fi novel with a unique take on time travel and alternate time continuums. Some writers have used the supernatural to transport characters through time, like Scrooge’s encounters with the ghosts of Christmas past, present, and future, in A CHRISTMAS CAROL. Another method allowing for time travel, especially in science fiction, involves space and time warps–usually a ship passing through a warp in the space time continuum or characters passing through portals from one time to the next. Stephen King employs the portal in 11.22.63. But the most common method to move characters through time requires a mechanism or machine. From H.G. Wells, THE TIME to the much-loved DOCTOR WHO, these stories use some kind of machine to transport from one time to the next.

The Alchimeia series uses alchemy, a precursor to empirical chemistry, as the mechanism for movement through time. Combining an ink and an alloy in the nib, a fountain pen becomes the catalyst as inkers write themselves into past lives, leaving their bodies in the present. Unlike conventional time travel scenarios, the characters leave their bodies in the present—only their consciousness moves through time to inhabit a host. However, once an Inker is in a host’s body, time is not on their side. They are in danger of losing themselves to the mind of their host, becoming psychotic and then melding completely with the host, lost in time forever. In order to avoid such a fate, upon completion of the mission, they must die in order to break the link and return home.

Die Back allows me to blend genres of fantasy, science fiction, historical, and speculative fiction to tell a fast-paced, action filled story of characters struggling to save the time continuum and reality itself. As you might imagine, this mechanism for moving back through time also has its challenges. In a conventional time travel story, a character travels back in time. It’s fairly straight-forward keeping the character distinct from others in the scene. In the Alchimeia series, since the characters leave their bodies in the present and only their conscious minds go into the past, the most significant challenge is having a physical character, such as Franciso Pissaro but with the conscious mind of Addison Shaw. Rather than visiting the past as a foreign entity, the character becomes the past. You’ll notice the inking scenes shift to first person which I’ve done to make a distinction with the present and to create an immediacy. The reader experiences the inking scenes within the perspective of the inker.

I think technically one of the more difficult scenes involved a German soldier in a fox hole at the Battle of the Bulge. There were essentially two characters inside the mind of a third character. The German soldier, Grimbald, and Addision’s mother, Rebecca, who has been held captive by Grimbald. The dialogue needed to distinguish between the internal voices of Grimbald and Rebecca in the German soldiers head, as well as dialogue with the American soldier external to them. Here’s a little excerpt to give you a sense of what I’m talking about. We begin in Rebecca’s perspective.

I look to the boy soldier and our guard, but of course, they cannot hear our thoughts. “How could you force me to act against my son, Grimbald?” His real name is Cuthbert Grimbald, using the alias Kairos to keep him clear of League Inkers. “You promised if I helped you–”

I promised I wouldn’t take his consciousness. For all the good it did me.

“I could have killed him. My own son. Please, I’ll do anything you want, but please don’t ask me to hurt Addison.”

You sabotage me at every turn, Rebecca. If I didn’t need your knowledge of the League I would scatter your consciousness across time. By God, I’ll do it anyway!

Think about it, Rebecca. Didn’t you see his eyes when he squeezed the trigger? The boy, knowing you were in Maya, blew out your brains! Trust me, you no longer hold a place in his heart.

My mind…compresses…a fist closing around me to darkness.

You continue to defy me?

I cannot breathe, I cannot think.

My mind goes to some dark corner. A desolate loneliness enfolds me. All senses closed off, no space, no time, no sensation. Nothing. Nothing. Noth…

He releases me. The world expands from a small, black hole, back to the Ardenne Forest. The boy still sits beside me in an almost fetal position. The icy cold air smells of pine and death. 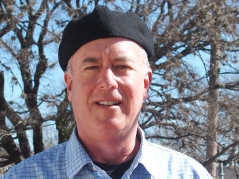 Richard Hacker, lives and writes in Seattle, Washington after living many years in Austin, Texas. In addition to the science fiction/fantasy novels of The Alchimeía Series, his crime novels ride the thin line between fact and fiction in Texas. Along the way, his writing has been recognized by the Writer’s League of Texas and the Pacific Northwest Writers Association. As a judge in literary contests shuch as PNWA and ChicLit, and as a freelance development editor, he enjoys the opportunity to work with other writers. In addition, he is the Sci-Fi/Fantasy editor for the Del Sol Review. DIE BACK was his first novel in the Alchimeia series. Follow the author at www.richardhacker.com or on Facebook at www.facebook.com/RWHacker

Buy Vengeance of Grimbald on Amazon.

All Del Sol Press books by Richard Hacker are available at Amazon.

Yes, there is a giveaway.

Richard Hacker will be awarding a $25 Amazon or Barnes and Noble gift certificate to a randomly drawn winner via rafflecopter during the tour.

This post is part of a tour sponsored by Goddess Fish. Check out all the other tour stops. If you drop by each of these and comment, you will greatly increase your chances of winning.

A few more words from the author:

Thanks for having me on the blog and thanks readers for dropping in today. Please check out DIE BACK and VENGEANCE OF GRIMBALD.  Both are available on Amazon. And I’d love to hear from you. Visit my website, www.richardhacker.com or on Facebook at www.facebook.com/RWHacker and drop me a line.

I don’t have a trailer for Vengeance of Grimbald, but I do for Die Back and it’s a good visual introduction to the series. You can find it here.

6 thoughts on “Vengeance of Grimbald”